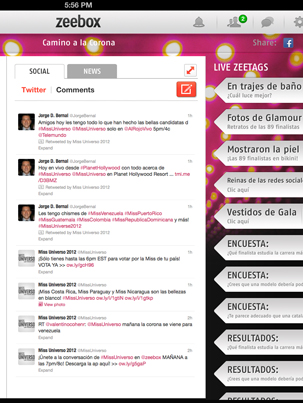 The partnership kicks off tonight with the 2013 “Latin Billboard Awards,” which will air at 7 pm ET/6pm CT.

Fans that download the free zeebox app will have access to exclusive second-screen experiences starting with the red carpet and continuing throughout the entire broadcast.

An image mosaic will present viewers with real time photos of celebrities as they walk the red carpet. Live zeetags within the show page will present users with music categories for finalists as they are being interviewed on TV and provide exclusive interviews from rehearsal week.

Fans will also be able to play the Prediction Game to guess which artists will win minutes prior to seeing the actual winner announced on-air.

The zeebox app allows Telemundo to engage its fans with synchronized zeetags which link to more content about what’s on TV at that moment.

These interactive features will also be used in the upcoming “2013 Miss Universe Pageant” and the Telemundo’s new series “La Voz Kids.”

The network will launch a bilingual mobile marketing campaign to drive awareness and participation for these new products.

New Telemundo viewing experiences to be launched on zeebox this year include: