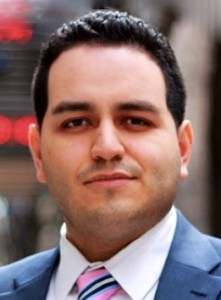 Adrian Carrasquillo is leaving NBCLatino to take on a new job at BuzzFeed.  His last day is May 29.  He joins BuzzFeed as a breaking news reporter where he will also help manage the @BuzzFeedNews Twitter account.

“NBC Latino and NBC News treated me amazingly and it was an honor to work for a first class news organization,” Adrian tells me.  “But I’m very excited to join BuzzFeed as a breaking news reporter on the team headed by our news director and recent New York Times hire, Lisa Tozzi, as we figure out how breaking news can and should work on the social web.”

Adrian has been with the Latino-focused NBC News site since October 2011, starting out as a reporter/web producer. He is currently Social Media Manager/producer, in charge of strategy and daily execution of NBCLatino’s social media, beefing up the site’s Facebook page.

Before NBCLatino, he crafted the social media strategy for Fox News Latino. He was previously a web producer at Fox 5 in New York. For now he can be reached on Twitter as @RealAdrianC.