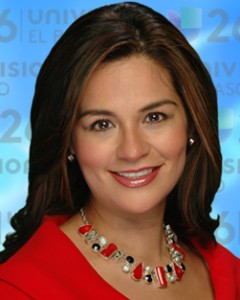 After 13 years with KINT Univision 26 El Paso, Karla Mariscal has decided to leave the company.  Her last day as co-anchor of the weekday prime time newscast Noticias 26 is June 15, 2013.

The Emmy-award winning anchor says she is not moving on to another job.

“Right now I don’t have any further professional plans,” she says. “I’m going to take a break from my career, and devote more time to my family.”

In a statement, she thanked Entravision, her co-workers and her viewers for their support.

Before joining KINT, Karla worked for as a producer and anchor for Televisa, Channel 56 in Ciudad Juárez.