Univision’s flashy upfront presentation included Steve Mandala, EVP of Advertising and Sales dancing with other sales executives on stage, President César Conde announcing a partnership with filmmaker Robert Rodriguez and launch of El Rey Network, and CEO Randy Falco doing a parody of the AT&T commercial where a group of children are outraged over the “less is more” concept.

The objective of the entire presentation: to point out  that English-language networks offer advertisers less for their dollars compared to what Univision’s multi-platform “One for All” solutions can deliver.

Univision emphasized its digital and on-demand offerings, which include UVideos and the soon to launch Flama.  Most of the new slate of shows for the next season are Televisa productions.

Here’s the 2013/2014 programming lineup for the Univision Communications properties: 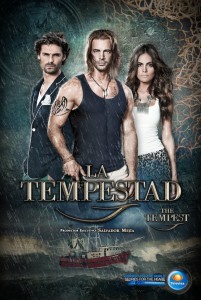 “Va Por Ti” – In search of the next music superstar, twelve of the biggest names in Latin music will join amateur singers as they compete to help them win the opportunity of a lifetime – the chance to become the newest Latin music star and secure a multiplatform deal with Univision and millions of dollars in prizes. Co-produced by Televisa and Univision. (Sunday, Primetime – Univision and Televisa)

Ten documentary films in partnership with Participant Media – Through an innovative and groundbreaking joint venture, Univision News and Participant Media (producers of “Lincoln,” “The Help” and “An Inconvenient Truth”) have come together to produce and market aseriesof 10 compelling documentaries drawn from the headlines, and produced in both Spanish and English for television, online and mobile distribution.

“Metástasis” – Based on the critically acclaimed American series “Breaking Bad,” “Metástasis” is the story of a struggling high school chemistry teacher who is diagnosed with inoperable lung cancer. He turns to a life of crime, producing and selling meth with a former student with the goal of securing his family’s financial future before he passes away. (Primetime – Sony Pictures Television)

“La Selección” – With the upcoming 20th anniversary of Colombia’s legendary 1994 World Cup team and their 5-0 victory over rival Argentina – one of the most inspiring stories in all of soccer history – UniMás presents the Caracol production of “La Selección.” Told for the very first time, it is based on the true stories of the four principle stars of the team, El Pibe Valderrama, Freddy Rincón, René Higuita and Faustino Asprilla. (Primetime – Caracol)

“La Viuda Negra” – based on the true story of Griselda Blanco, “the Cocaine Godmother,” who virtually ruled the Miami drug trade in the 1970s and early 1980s. Born an illegitimate child in a bordello in Colombia, she grew up on the backstreets and learned how to use her charms and wits to start a life of crime that eventually took her to Miami. There she became the undisputed queen of the illegal drug trade with Colombia. Married four times, she killed each of her unfortunate husbands, thus earning the name “The Black Widow.” (Primetime – RTI) 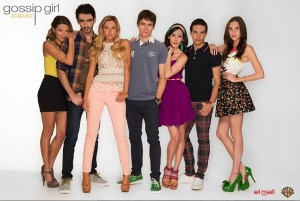 “Gossip Girl Acapulco” – Based on the successful American series, “Gossip Girl Acapulco” is a look into the privileged and often turbulent lives of an elite group of beautiful young people in Acapulco. It will be the first time a dramatic series airs simultaneously in the U.S. by Univision and in Mexico by Televisa. (Primetime – El Mall)

“Diablo Guardián” – The series features a 15-year-old girl, who is always at odds with her parents and wants no part of their plans for her in Mexico. She steals more than $100,000 and crosses the Mexican border into the U.S. She settles in New York City to fulfill her dream of living ‘the good life’ in the Big Apple. But money has a way of running out and she finds out the hard way that survival for a young, unskilled, immigrant girl comes at a price. “Diablo Guardián” is based on the best-selling novel and adapted by Gustavo Bolivar, writer of “El Capo” and “Sin Senos No Hay Paraiso.” (Primetime – RTI)

“Los Héroes del Norte 3” – This comedic adventure returns narrating the fun of five characters who meet under the worst of circumstances and form a band in their search for stardom within the world of norteño music.  (Primetime – Televisa)

“#Hoy Soy Nadie”  – Mateo Blanco is a skilled programming designer who works at a well-known newspaper, and whose fate is turned upside down. Having committed a small fraud to his company, the owner sends Mateo on a strange mission in exchange for his freedom: he must collect blood samples from 15 young men and women from a list – without them or anyone suspecting it – in order to determine their possible identities as a missing heir. Now Mateo will have to rely on social media and his skills to find everyone on the list, adopting a different persona for each to infiltrate their lives, while keeping his task carefully hidden from his family and friends. (Primetime – Televisa)

“Místico e Inexplicable” – docu-reality series hosted by Victoria Moreno that explores the paranormal. From UFOs, paranormal encounters and crop circles, to the Mayan calendar and stigmata, this show offers viewers a window into the mystic world.  (Weekend – Galavisión)

“México” – A series of hour-long documentaries dedicated to the experience of Mexico through its history, culture, sports and people. These documentaries have salvaged an archive of memories, as well as the country’s present and past. Featured shows include ‘La Vida de Chespirito’ (The Life of Chespirito), ‘Sara Garcia,’ ‘Tianguis and Mercados,’ ‘La Televisión Mexicana’ (Mexican Television), ‘Cómicos Mexicanos’ (Mexican Comedians), ‘Detrás de la Cocina Mexicana’ (Behind the Mexican Kitchen) as well as unforgettable sports stories. These are just some of the topics of this true video library of Mexico to be inherited by future generations. (Weekend – Galavisión)