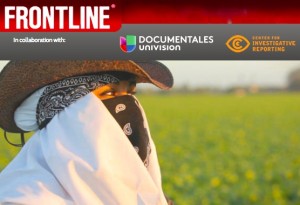 FRONTLINE partnered with Univision News for the documentary “Rape in the Fields/Violación de un Sueño.”

The documentary uncovers the hidden price that many migrant women working in America’s fields and packing plants, especially those who are undocumented, are paying to keep their jobs and provide for their families.

The investigation will air as “Rape in the Fields” on FRONTLINE on Tuesday, June 25, at 10 p.m. and on the Univision Network as “Violación de un Sueño” on Saturday, June 29, at 7 p.m. Both broadcasts will be accompanied by original, multiplatform content from all partners.

Traveling from the almond groves of California’s Central Valley to the packing plants of Iowa, from the apple orchards of Washington’s Yakima Valley to the tomato fields of Florida, the investigative team spoke with dozens of women who say they have been sexually abused on the job.

The investigative team interviews women who speak on camera about their alleged abuse for the first time, as well as women who have tried to hold companies accountable in civil court for the actions of their supervisors.  Forensic evidence is rarely gathered; few women are willing to report the crime, and even fewer rape cases are ever litigated. “There’s been little response from law enforcement agencies to do anything about this problem,” Bergman says.

According to Raney Aronson-Rath, the deputy executive producer for FRONTLINE, this will be the first time the program has collaborated with a domestic broadcast partner on a premiere.

Watch Rape in the Fields on PBS. See more from FRONTLINE.