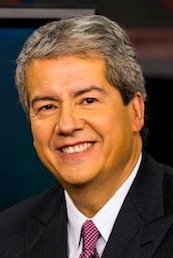 After more than 13 years off the air, José Gray is back in the anchor chair.  He has joined Entravision as News Anchor and Executive Producer of  WVEA TV 62, Univision Tampa Bay’s newscast, launched on Monday, June 3.

José anchors the 6 pm with Natalie Pérez, and is solo at 11 pm.

“I feel like I had never left,” José tells me about returning to television after such a long absence. “It’s like coming back home to where you were born, where you have such good memories.  Technology has obviously advanced, but the basic principle remains the same: to find and select stories that are important for our community.”

Before June 3, WVEA TV 62 co-produced a newscast with its Orlando sister station. The first block focused on Tampa and the rest of the newscast was produced for and from Orlando.  As of last Monday, the newscast is produced entirely in Tampa.

“I’m working with a team of very young journalists,” says José. “I have the opportunity to advise them and help them grow, based on my experience.  It’s very gratifying.”

For the past 13 years, José has been in private business as President of Ebenji collectibles.  But he is most well-known for his 12 years as a correspondent and anchor for Univision in New York, Miami and for the network.  He left Univision in 1995 to join CBS Telenoticias as an anchor, where he stayed for almost 5 years.