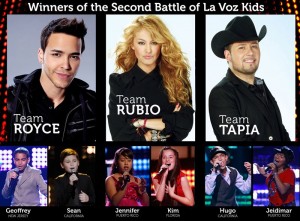 Overall, Telemundo is on track to deliver its best quarter in the network’s history, delivering an average of 807,000 adults 18-49 during Monday through Sunday primetime programming, up 37% percent over last year, according to Nielsen.

The network ranked as the #6 broadcast network in general market primetime programming.

Since its premiere, “El Señor de los Cielos,” which airs Monday through Friday at 10pm (ET/PT), averages over 2.2 million total viewers and more than 1.4 million adults 18-49.  The series, which stars Rafael Amaya, Ximena Herrera, Fernanda Castillo and Gabriel Porras, ranked #1 with adults 18-34 regardless of language 11 times and has beat at least one of the English-language networks among adults 18-34, 45 times. It beat Univision to rank #1 with adults 18-34 among the Spanish-language broadcast networks 22 times.

“La Voz Kids,” which premiered on May 5 has become Telemundo’s #1 reality series, averaging 2.1 million total viewers and 1.1 million adults 18-49 premiere-to-date.  In May 2013, the “La Voz Kids” page was the #1 online and mobile destination among Telemundo’s digital properties, generating over 3.3 million page views online and over 1.5 million mobile hits.  Since the series premiered, show’s Facebook page has grown close to 200,000 friends, while its Twitter has reached over 36,000 followers.

Deportes Telemundo’s “Rumbo al Mundial” Soccer World Cup Qualifiers delivered strong numbers in the second quarter of 2013. On Tuesday, June 4 at 8:30PM ET, the match between Jamaica and Mexico ranked as the #1 sporting event on television – broadcast or cable – regardless of language among adults 18-49, averaging 1,733,000 viewers in the demo and 2,867,000 total viewers.