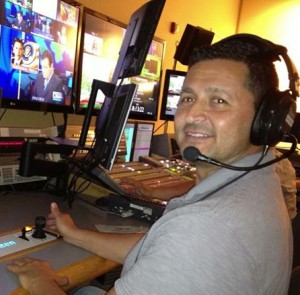 Photographer César Victoria has left his job at KUVS-19 Univision Sacramento to take a job at the California State Department of Consumer Affairs.

His last day at KUVS was last Thursday, May 30. He started the new job as a Television Specialist in the Office of Public Affairs today.

César says he was looking for more stability and liked the idea of an 8 am to 5 pm weekday job.

“Even though I really enjoyed my work, I have to think about my future as I get older.  I took an opportunity that knocked on my door that offered me a new phase for the next 15 years of my professional work life.”

An Edward R. Murrow and multi-Emmy award winning photojournalist, César worked 17 years in the broadcast news industry. He spent the majority of his career in Los Angeles covering news, sports and entertainment for Telemundo-KVEA 52 and Univision-KMEX 34.