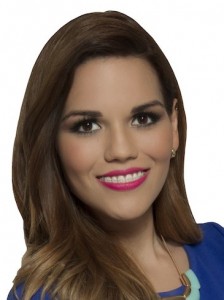 Karina Banda has joined KUVS-19’s early morning show “A Primera Hora,” as a co-anchor and reporter. Her first day on the air at the Univision Sacramento station was Monday, July 29.

One of 3 co-anchors for the morning show, she has been teamed up with Maribel López and Gustavo Ortiz.

Karina comes to the Univision Sacramento station from Televisa Monterrey, where she was a co-anchor for the evening newscast.