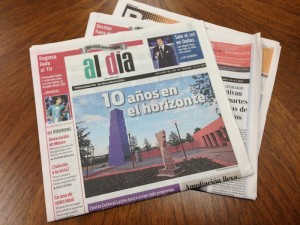 Al Día newspaper in Dallas is celebrating its 10 year anniversary. The Belo-owned sister publication of the Dallas Morning News was launched Sept. 29, 2003 as a paid daily newspaper, Monday-Saturday.

At the time of the launch, Gilbert Bailón was the founding publisher, Mike Cano, the founding General manager and Alfredo Carbajal, the founding Managing Editor.Both Gilbert and Mike have moved on, but Alfredo remains at the paper.

The distribution strategy was modified in 2005 taking Al Día to a free model and adding home delivery.

In 2009, Al Día was forced to trim down due to the lousy economic climate.  According to Al Día was able to “weather the storm by reinventing its business model.” The paper reduced print publication to Wednesday and Saturdays, but increased average weekly distribution to 225,000 copies in the Dallas market.

Al Día currently has core team of 9 editors.  Its online portal, Aldiatx.com, updates its content on a daily basis.