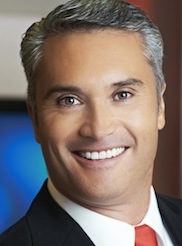 Although he was welcomed on the air live during its morning show “Un Nuevo Día,” on Monday, September 9, Telemundo Media officially announced today that Mexican journalist Edgardo del Villar has joined its news team.

Edgardo will be a correspondent and fill-in presenter for a number of the network’s programs, including “Un Nuevo Día,” “Al Rojo Vivo con María Celeste” and “Noticiero Telemundo.”

He joins Telemundo after spending the past 12 years as anchor of “Las Noticias,” Televisa’s primetime newscast in Monterrey.

Besides his television work, Edgardo was a news director and anchor for various radio networks, including MVS, Radio Fórmula and Núcleo Radio Monterrey for over 10 years. He also served as an advisor to the Editorial Board of “Grupo Reforma,” Mexico’s largest newspaper group.