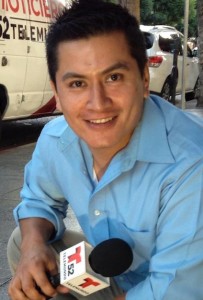 Víctor Hugo Rodríguez left his reporter job at KVEA-52 for family reasons.  He returned to Phoenix to be close to his daughter.  His last day in L.A. was Aug. 30.  He had been with the Telemundo O&O since Feb. of 2012.

Now, he’s leaving the television industry.  He has accepted a job as a Language Arts teacher at Lowell Elementary School in Phoenix.  He starts the new job next Monday, Sept. 16.

“Being able to work for Telemundo Los Angeles was a dream come true.  That was the first TV station I visited while I was still in college,” Víctor Hugo tells me.  “I did my internship at KVEA in spring 2000. However, due to a legal matter pertaining my daughter, I decided to move back to Phoenix…. There is no doubt in my heart I made the right decision.”

Prior to moving to L.A., Víctor Hugo worked for 9 years as a reporter for KTVW-33, the Univision O&O in Phoenix.  He previously spent 2 years as a segment producer for KWHY-22 in L.A. and a reporter at KUVS-19, Univision Sacramento.