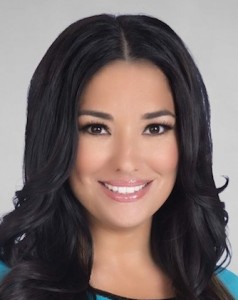 “Noticiero Telemundo 52, Buenos Días Los Angeles,” which airs Monday to Friday from 5 to 7 am, has a new member of the morning team.  Estefanía Iglesias has joined the show as traffic and weather reporter, alongside co-anchors Dunia Elvir and Julio Vaqueiro.

Telemundo made the announcement official today, although Estefanía started the job on Oct. 1.

She was most recently a weather and entertainment reporter for KRCA-62 in Los Angeles.  Estefanía began her on-air career as a host for America TV in Argentina and later became a correspondent for the show “E! Specials” on E! Entertainment Latin America.