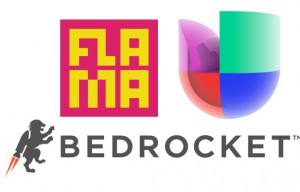 Univision and Bedrocket are co-investors and creative partners for the digital network, which will release a preview destination this fall on YouTube and launch the official Flama destination in early 2014.

Programming on Flama will include established and emerging stars in scripted and docu-series formats.  Flama programming will live across other Univision platforms and through major video distribution partners, including Vevo.

Univision first announced the creation of Flama during its Newfront presentation in May 2013. Flama is part of the Flama Media Network, LLC.