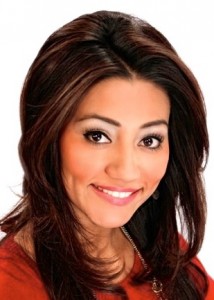 Rita Garcia, who had been filling in as KRIV’s morning news anchor since October 1st, has been given the job permanently. Her new role at the station was announced Monday and made effective immediately.

She’ll be anchoring the news from from 4-7 a.m.

“I’m so excited to continue my career with the Fox family. It’s quite the switch setting my alarm at 2 a.m., but our viewers give me the energy to do this everyday,” says Rita. “Over the past 2 years Houstonians have welcomed me into their homes and I owe this great opportunity to ALL the viewers.  I look forward in continuing to serve this great city, Houston.”

Rita joined Fox 26 in Houston 2 years ago as weekend anchor/reporter.  She was previously a freelance reporter for KCBS/KCAL9 in Los Angeles. Before that, she worked at KRGV-5, the ABC affiliate in the Rio Grande Valley for three years and at NPR in Washington, D.C.