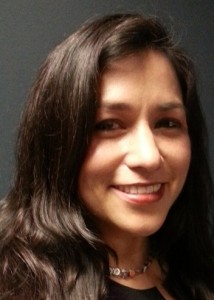 After a 3-year stay at U-T San Diego (formerly the San Diego Union-Tribune) covering immigration and demographics, Elizabeth Aguilera is leaving the paper and moving up north to Los Angeles.  She has accepted a job at Southern California Public Radio (KPCC) as Senior Health Reporter.

Today is Elizabeth’s last day at the paper.  She starts at KPCC on January 20, when she’ll be joining a new four-person team to cover issues of health in the region.

“I’m excited to expand my journalistic skills into audio while also writing for the website,” she says.
While at U-T San Diego she won a Best of the West award for her coverage of sex trafficking between Mexico and the U.S.  Elizabeth previously worked for The Denver Post and the Orange County Register.