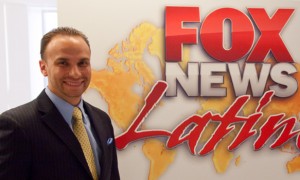 Francisco Cortés, who in October of 2010 launched FoxNewsLatino.com and since then has overseen the daily operations of the website, has been promoted from Director to VP of Fox News Latino.

He is the first Hispanic to hold a VP position within the news division of Fox News channel.

Francisco has been with Fox for 15 years.  He joined the network in 1999, working his way up the ranks.  His first job in broadcasting, after 3 years in the army, was as a production assistant for Fox News Channel.

In 2001, he was upped to Associate Producer for Fox Report with Shepard Smith.

In March of 2003, he was one of the first to be selected for the Roger Ailes apprentice program, which gave him the opportunity to be mentored by Ailes and his executive team.

In May of that year he was promoted to daytime programming producer. After 3 years in that job, he was again promoted to Graphics Production Manager in 2007.

Francisco has been leading the charge at FoxNewsLatino.com since February of 2010.