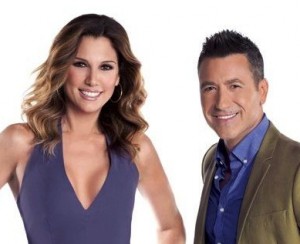 Daisy Fuentes and Jorge Bernal will be back as hosts for season 2 of Telemundo’s “La Voz Kids.” The Sunday night reality show is set to premiere in the spring of 2014.

The music competition, which reached over 14.5 million total viewers in the first season, features young vocalists between the ages of seven and 15 competing for a recording contract and a cash prize to support their education.

Season 2 will be produced for the first time out of Universal Studios Florida.

Daisy Fuentes, who began her television career as a weather-girl for WNJU, Telemundo’s New York station, broke out on MTV as the network’s first Latina VJ. She has hosted several television shows, including “MTV’s House of Style,” “MTV Internacional,” “America’s Funniest Home Videos” and specials such as the “Miss Universe” and “Miss USA” pageants, “Countdown to the Latin Grammy’s,”  and “Dick Clark’s New Year’s Rockin’ Eve.”

Jorge Bernal is the host of Telemundo’s daytime entertainment show, “Suelta La Sopa” and his own radio morning show, “Tu Mañana Live!” on SiriusXM’s channel 152.  For more than a decade, he was entertainment anchor for “Al Rojo Vivo con María Celeste” and also hosted other Telemundo productions, including the red carpet specials for “Billboard Latin Music Awards” and “Premios Tu Mundo.”