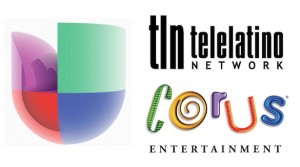 Univision has signed a licensing agreement with Telelatino Network, a holding of Corus Entertainment, to rebrand TLN en Español (TLNE) as Univision Canada.

TLNE, an all Spanish language cable specialty channel, has been a Univision partner for over a decade. The channel is currently carried by all of Canada’s largest cable and satellite platforms.