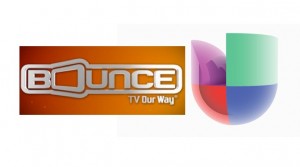 Univision has signed a multi-year deal to add Bounce TV as a multicast channel on its stations in New York City, Los Angeles, Dallas, Orlando and Phoenix in 2015.

The agreement also includes the distribution renewal of the African-American television network already available on its stations in San Francisco, Boston, Miami, Denver, Sacramento, Raleigh and Tampa since December 2012.

The financial terms of the agreements were not disclosed.