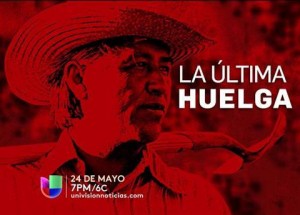 The U.S. television premiere of “La Última Huelga,” the Spanish-language version of the documentary film “Cesar’s Last Fast” will air on Univision, while the English-language version  will be simulcast on the Pivot cable TV network this Saturday, May 24 at 7 pm ET.

The documentary, which debuted this year at Sundance Film Festival, is part of a content alliance between Univision News and Participant Media.

Using never-before-seen footage of Chávez and testimonies of those closest to him, “Cesar’s Last Fast” focuses on his last and most difficult act of protest, the 36-day water-only hunger strike he completed in 1988, at age 61, to raise awareness about the horrific effects of pesticides on farm workers, their families and their communities.

The film was directed by Richard Ray Perez and Lorena Parlee.

After its broadcast premiere, it will be available for viewing on UVideos.com and the UVideos iOS and Android Apps.