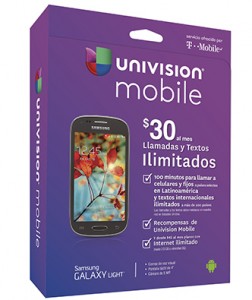 Univision has partnered with T-Mobile to create Univision Mobile, a wireless service that aims to target the Hispanic market with low-cost plans and Univision content.

The service will be available nationwide starting May 19.

Univision announced the launch of the service today. Financial terms of the Univision Mobile deal were not disclosed. But the agreement would provide customers with T-mobile phones that have pre-installed Univision apps, ringtones and content, right out of the box.

Both companies hope to capitalize on the growing Hispanic population, currently estimated at almost 56 million.

According to Nielsen, 72% of Latinos own smartphones and 49% say they plan to replace or upgrade smartphones within the next six months.