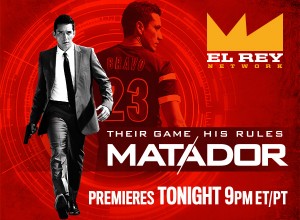 Spy thriller “Matador” debuts tonight on cable network El Rey Network. The series, from award-winning writer/producer Roberto Orci, hasn’t even premiered and it has already been picked up for a 13-episode second season.

Shot in Los Angeles, the series chronicles the unlikely rise of Tony “Matador” Bravo (Gabriel Luna), a professional soccer player for the LA Riot, who is actually a covert CIA operative.

“Matador” features an international cast including Gabriel Luna (NCIS: Los Angeles, Prison Break) in the title role of Tony “Matador” Bravo; Alfred Molina (The Da Vinci Code, Spider Man 2) as Andrés Galan, the billionaire owner of the ascendant LA Riot franchise and a member of an elite group of powerful global players; Nicky Whelan (Left Behind, Chosen, The Wedding Ringer) as Annie Mason, Tony’s analytical control agent who serves as the head of a little known branch of the CIA; Neil Hopkins (Bones, True Blood) as Noah Peacott, Annie’s brilliant but awkward partner; and Tanc Sade (The Gilmore Girls, 90210) as Alec Holester, an English striker for the LA Riot who is past his prime, but still very skilled.

Entertainment One Television (eOne) exclusively represents worldwide distribution rights (with the exception of U.S. broadcast network rights) for El Rey Network’s “Matador” and other original scripted series created for the U.S based cable network that have yet to be announced.