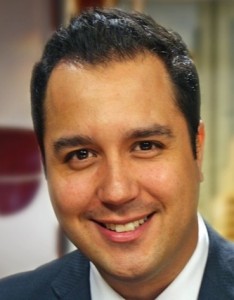 Hugo Chávez Montes is the newest addition to the KAKW Univision 62 Austin news team. Hugo has been hired to anchor the station’s 5 and 10 pm weekday newscasts alongside veteran anchor Regina Rodríguez.

His first day on the air was Monday, August 11.

Hugo comes to Austin from Grupo Televisa, where he worked for eight years as a reporter and anchor of the morning show “Hoy por Hoy,” as well as anchor of the evening news “Las Noticias Televisa Monterrey.” He also worked for MVS Radio Monterrey, where he was news director since 2010.

Hugo began his broadcast career as a news editor, reporter and producer at TV Azteca Noreste in 2001.

He joins recent additions to the Noticias Univision 62 team including: Miguel Gaytán, who was named news director in April of this year; Liliana Soto, recent graduate from The Walter Cronkite School of Journalism and Mass Communication, and Paulina Garza, the station’s first University of Texas at Austin Fellowship recipient who joined the team this summer.