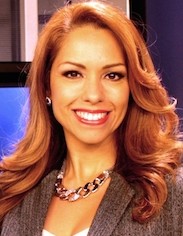 Soraya Galán returns to Orlando as news anchor for Entravision’s “Noticias Univision Florida Central.” She joins co-anchor Paul Gamache at 6 and 11 pm. Her first day on the air was yesterday, September 15.

She replaces anchor Sharon Miranda, who left the the news business and whose last day on the air was July 31.

Soraya previously worked as anchor for competitor WTMO Telemundo Orlando from 2007 to 2009.

During the past 5 years, she has worked as a reporter for WSCV-51, the Telemundo O&O in Miami. She has also done stints as a producer/reporter for Univision Radio Network and for Telemundo Network’s “Al Rojo Vivo.”

Prior to her first tour of duty in Orlando, Soraya worked as weather anchor for Telemundo Network’s “Esta mañana” and was also on-air talent for Univision’s “Despierta América.”