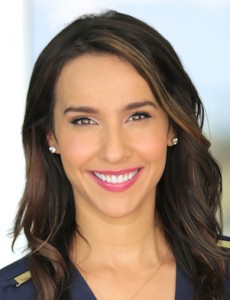 KXTX Telemundo 39 in Dallas-Fort Worth announced today that it has hired Teresa González as weather anchor for the station’s weekend newscasts.

Her first day on the air is this Saturday, September 6. She joins weekend news anchor Nancy Leal and weekend sports anchor Erik Mora.

Teresa was most recently news and weather anchor at KUNS, the Univision affiliate in Seattle, where she had worked since 2010.

She was previously a producer and morning show host for Azteca América in Eugene, Oregon, where she also worked as a news reporter and producer for the NBC affiliate.

Teresa began her career at the ABC affiliate in Eugene as a producer.