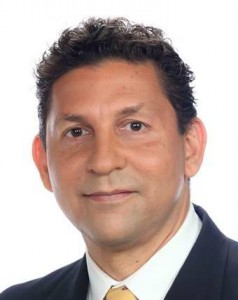 MundoFox 22 reporter Carlos Rubén Zapata was arrested and charged with two felony counts of corporal injury on a spouse.

The 51-year old Zapata was arrested at 1:40 am on December 3 after a domestic violence call and  initially charged with one felony count of corporal injury on a spouse.

According to his wife, he threw a flower pot at her head, causing serious injuries that required stitches.

He was booked at 4:04 am and released on $50,000 bail 7 hours later. By 5 pm, he was on the air, reporting live on the grand jury decision to dismiss charges against a policeman in the death Eric Garner in New York.

The Dec. 3 incident is apparently not the first in the Zapata household. His wife alerted police to a previous attack a month earlier, leading the LA District Attorney to add a second felony charge.

Zapata is due in court on Dec. 24. If found guilty, he faces a maximum of 10 years in prison.

**UPDATE – After a request for comment on Zapata’s arrest, a MundoFox 22 spokesperson sent the following statement at 6:45 pm:

“This morning we were informed by the District Attorney of Los Angeles County that reporter Carlos Ruben Zapata is under investigation by the Los Angeles Police Department for a case of domestic violence.  It is our protocol that until this case is resolved, KWHY Channel 22 will not be issuing comments. We also take this opportunity to reiterate that domestic violence is an issue of increasing concern in our community.   Because of this, our station is committed to bringing viewers important information that raises awareness of domestic violence as it affects this community and this country.”

Zapata’s bio and photo have disappeared from the station’s website.