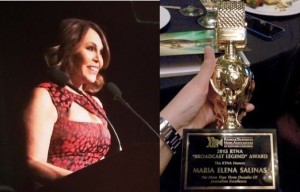 She becomes the first woman and first Latino/a to be honored with the award.

Univision’s KMEX picked up awards in four categories and Telemundo’s KVEA got two that evening.

Many other Latino journalists working in radio and television in Los Angeles, Santa Barbara, Fresno and Bakersfield.

Both Oscar and Victoria work at KEYT in Santa Barbara.

After the ceremony, the NAHJ Los Angeles chapter also held a special event to honor María Elena Salinas for her career and for being a co-founder of the journalist organization.

The complete list of winners is available on the RTNA site.