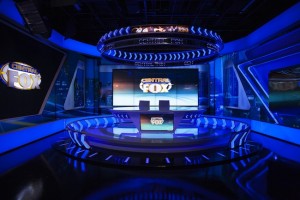 On the heels of its third year anniversary, Central Fox, the Mexico-based sports news show on Fox Deportes network, has unveiled its new state-of-the-art studio.

The new facility will house the shows’ four editions. The 3,000 square foot studio boasts a variety of mini-sets and has a multidimensional display wall comprised of 12 monitors.

The main desk has is designed for three hosts and a built in monitor. A custom built LED screen above the main desk will feature the latest headlines in real time.

A 2 x 2 monitor wall which allows hosts to interact with the content displayed will be used for three new sections – La Editorial, Play of the Day and the best goals of the week. It will also serve to feature updates from “La última palabra.”

According to the company, the Central Fox “facelift” took a year of planning.