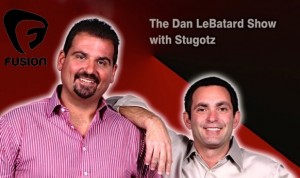 Fusion and ESPN Radio have reached an agreement to do a live simulcast of “The Dan Le Batard Show” on the Univision/ABC joint venture cable network.

The simulcast will start airing live on Fusion on weekday afternoons from 4 to 7 pm in the spring.

In addition to his show on ESPN Radio, Dan is known for his work as a sports columnist for the Miami Herald. He is also a frequent contributor to many programs on ESPN.