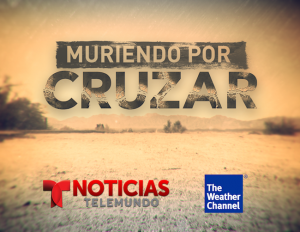 Correspondent John Carlos Frey and executive producers Marisa Venegas and Solly Granatstein will receive the prestigious George Polk Award for Television Reporting for “Muriendo por Cruzar” and “The Real Death Valley,” the Spanish and English versions of a joint investigation by Telemundo, The Weather Channel, and The Investigative Fund.

The documentary, produced in collaboration with Efran Films, explores the plight of migrants in the harsh desert terrain of Brooks County, Texas, where more than 400 bodies have been found in the past five years.

“Muriendo por Cruzar,” hosted by Noticias Telemundo reporters Carmen Dominicci and Neida Sandoval, describes the extreme weather conditions in the border region, investigates reports of mass graves and shares the testimony of the forensic anthropologists charged with identifying the remains of those who perish in their quest.

The George Polk awards, given each year by Long Island University, honor special achievement in journalism. Winners are chosen from newspapers, magazines, television, radio and online news organizations. Judges place a premium on investigative work that is original, requires digging and resourcefulness, and brings results.

A list of all the winners is available  on the LIU site.