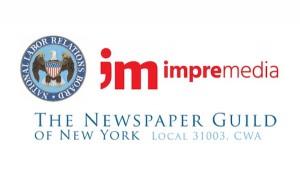 The Newspaper Guild of New York announced today it has reached a tentative agreement with El Diario/ImpreMedia that includes a contract extension with raises for staff, compensation for fired employees and a no-layoff pledge for 2015.

According to the Guild, the deal would extend the current its contract with the company by two years and settle several unfair labor practice charges that were about to go before a National Labor Relations Board (NLRB) trial judge.

The agreement, details of which were not released pending member ratification, includes:

impreMedia management and the Guild agreed to the deal days before the NLRB was set to begin an administrative trial against the media company.

El Diario faced charges it had illegally fired Guild-represented journalists and other employees and violated a previous NLRB settlement in which the company pledged to abide by its contract with the Guild.

The NLRB must approve the settlement, which also requires a vote by Guild members at El Diario. A ratification meeting is scheduled for Monday, March 9.