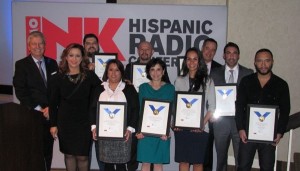 The Radio Ink Medallas de Cortez Awards, which honor those working in Hispanic radio, were handed out last Wednesday night.

The 2015 winners were announced during a ceremony at the Hispanic Radio Conference in Dallas.

SBS’ Albert Rodriguez won this year’s award for Broadcaster of the Year and Univision’s Enrique Santos for Syndicated Personality of the Year.

The awards are named in honor of Raoul Cortez, who founded KCOR, the first Spanish-language station in the United States in 1946.