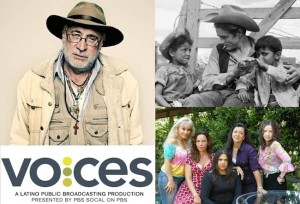 A fourth film, “Pedro E. Guerrero: A Photographer’s Journey,” will premiere this fall as a special co-presentation of VOCES and THIRTEEN’s American Masters. VOCES is presented by PBS SoCal.

The series kicks off April 17 with Hector Galán’s “Children of Giant.” Sixty years after production began on George Stevens’ classic Giant, this new documentary returns to Marfa, Texas to explore how the groundbreaking film both reflected and transformed the lives of the town’s Anglo and Mexican-American residents.

“Now en Español” (April 24) explores the ups and downs of being a Latina actress in Hollywood through the lives of the five women who dub “Desperate Housewives” into Spanish for American audiences — and whose real lives are often as dramatic and desperate as those of their onscreen counterparts.

“El Poeta” (May 1) is a profile of Mexican poet Javier Sicilia, who ignited an international movement for peace after the brutal killing of his 24-year old son — collateral damage in a drug war that has left more than 100,000 dead or missing since 2006.