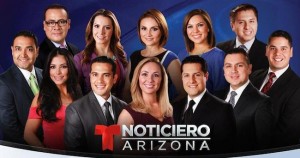 KTAZ Telemundo Phoenix is celebrating its April 2015 ratings. “Noticiero Telemundo Arizona” at 10 pm was the most-watched local newscast in the market among Adults 18 to 34 and Adults 18 to 49, regardless of language.

This is the first time in 25 years that Telemundo’s local newscast at 10 pm scores the number one spot in Phoenix and regardless of language in the two key demographic groups.