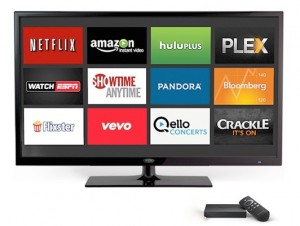 About 56% of all U.S. homes now have at least one TV set connected to the internet via a smart TV, a stand-alone player like Roku, Chromecast, Apple TV or Amazon Fire TV device, a gaming console or a Blu-ray player.

According to consumer research from the Leichtman Research Group, while 27% of all households have a TV set connected via one device, 29% of households are now connected via multiple devices.

Overall, 29% of adults watch internet-delivered video via a connected TV at least weekly, compared to 17% in 2013, and 5% in 2010 and one-third of adults now watch video on non-TV devices daily.

The U.S. pay TV industry recorded a loss of 31,000 subscribers during Q1 of 2015. This is the first time the industry has ever lost subscribers in a first quarter. According to MoffettNathanson analyst Craig Moffett, the loss is a result of cord-cutters tuning in to streaming services like Netflix, Hulu and Amazon Instant Video. “Cord-cutting has finally accelerated,” Moffett wrote in a research note earlier this month. “It’s not too early to get worried.”

-52% of households get a subscription VOD service from Netflix, Amazon Prime, and/or Hulu Plus;

-43% of adults stream an SVOD service at least monthly.

-43% of pay-TV subscribers get Netflix – compared to 50% of all pay-TV non-subscribers.

-10% of adults are very interested in HBO Now (HBO’s recently launched stand-alone OTT service) at $14.99 per month without having to subscribe to a pay-TV service.