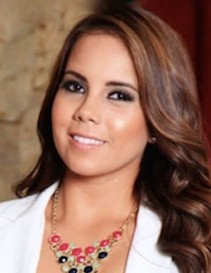 Andrea Cruz will be joining WWSI Telemundo 62 Philadelphia. She’ll be a weekday reporter for the station’s 5:30, 6 and 11 pm newscasts.

According to a station rep, she’ll start on air within the next 3 to 4 weeks.

Andrea moves to Philadelphia after spending 7 months as a Miami bureau reporter for the Telemundo Station Group. She was part of the NBCU-owned Television Stations Reporter Development Program.