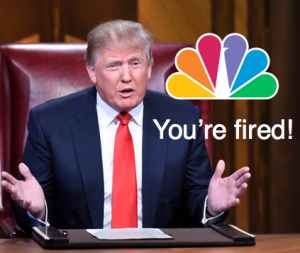 Insulting Mexicans during the speech announcing his presidential candidacy has backfired big time for Donald Trump.

First, Univision severed ties with Trump, refusing to air the Spanish-language telecast of Miss Universe and the Miss Universe pageants after he stated Mexican immigrants are criminals, drug dealers and rapists, reiterating those comments in interviews.

Now, NBC has pulled the plug on both shows and Trump himself.

“At NBC, respect and dignity for all people are cornerstones of our values. Due to the recent derogatory statements by Donald Trump regarding immigrants, NBCUniversal is ending its business relationship with Mr. Trump.

To that end, the annual Miss USA and Miss Universe Pageants, which are part of a joint venture between NBC and Trump, will no longer air on NBC. In addition, as Mr. Trump has already indicated, he will not be participating in “The Apprentice” on NBC.” 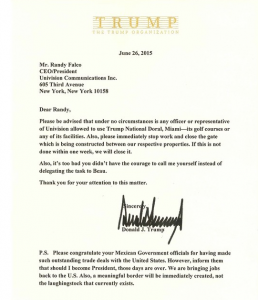 NBC had been under pressure to take action since Univision broke off business dealings with Trump last week.

Almost 220,000 people signed a petition on change.org asking NBC to “fire” Trump and his shows.

“Please cancel Miss USA, Miss Universe and the Apprentice. You are supporting a hateful and narcissistic individual without any kind of values, both personal and business wise. Not only that, but you are supporting a growing trend of bigotry and division in this country. Mr. Trump does not need to apologize anymore, which he will not according to his remarks after being dumped by Univision,” reads the petition. “A large part of your audience is Hispanic and we watch NBC, NBC News, and Telemundo. How about looking out for us?”

Trump, meanwhile, has been fighting back his own way since last Thursday, threatening lawsuits, tweeting comments and banning Univision employees from his resort and golf club in Miami. (He actually sent Univision CEO Randy Falco a letter prohibiting network staffers use of the Trump National Doral facilities.)

In response to NBC’s action, Trump today posted a statement on Instagram reaffirming his comments about 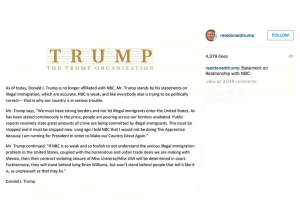 Mexicans and calling NBC “weak” for trying to be “politically correct,” affirming that’s why “our country is in serious trouble.”

He also warned NBC that the decision to violate its contract with the Miss Universe Organization will be determined in a court of law.

There has been a lot of press recently around the decision related to Donald Trump and I want to address it with you so you understand the position taken. I made the decision to end business relationships with the Trump Organization simply because it was the right thing to do. No one approached me, asked me or pressured me to take this action. There have been a number of ridiculous assertions bordering on the bizarre, made from different people, that the Mexican government put pressure on us, that we were under political pressure to hurt a Republican candidate’s chances to the nomination, or that we were trying to assist other political candidates. None of this is remotely true. I can also assure you that we never apologized because we have nothing to apologize for.

At Univision, a U.S. based Company that proudly serves as the voice of Hispanics, we had to act according to our values as a mission driven company dedicated to serving our community. We cannot be associated with insulting and intolerant speech that brands an entire community of Mexican immigrants in the U.S. as people who bring drugs, crime and rape into our country. To the contrary, as I said in our statement, we see first-hand the work ethic, love for family, strong religious values and the important role Mexican immigrants and Mexican-Americans have had and will continue to have in building the future of our country. We took this action because it preserves the dignity of our community and our employees and our relationship with them.

I know a lot of us were angered and hurt by the comments made by Mr. Trump, but I want to ask you to be confident in our decision and dignified going forward. As offended as we were, we should not use, on any platform or communication, the same incendiary language we are standing against.

The response of our community has been inspiring and I’m grateful for how the diverse Hispanic community is uniting to stand up for what is right. We should continue to foster this unity by promoting positive dialogue through the hashtag #todosmexicanos.