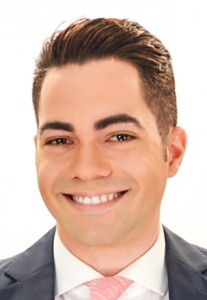 He arrives to Atlanta from KSWB, the Fox affiliate in San Diego.

His first day was Monday, June 29.

Before his move to San Diego, Christian worked from 2007 to 2012 as an anchor/reporter for the English and Spanish operations of Central Florida News 13 in Orlando.

The Puerto Rican native was previously a news reporter at WJHG, the NBC-affiliate in Panama City, FL.