Despite a steady erosion of viewers in morning, early evening and late night, broadcast TV continues to be popular for local news consumption, according to a recent Pew study.

Even though local TV affiliates have lost on average 12% of their viewers since 2007, there has been an increase in viewers – just not at the traditional time slots. 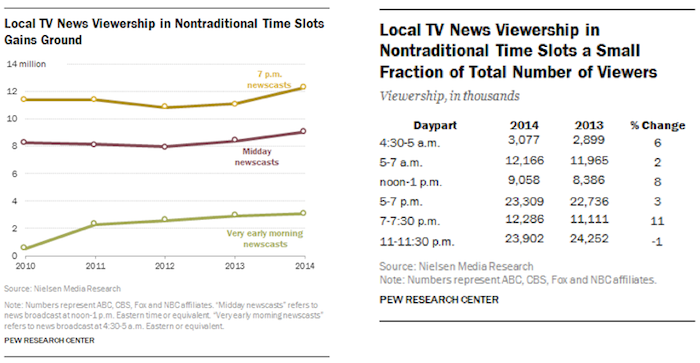 The Pew study points to a growth in local TV news viewership at stations that have newscasts very early in the morning, at midday and at 7 pm.

Local TV stations’ expansion of news programming to nontraditional hours has driven the growth in 2014:

The Pew study shows the biggest increase in news viewership was during the 7 pm time slot – 11% – compared to 2013.

Even with these gains, the total number of viewers for these dayparts don’t come close to the the averages in a traditional time slot.