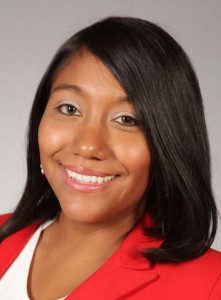 Carolina Cruz is moving to warmer weather. She’s leaving WTVO/WQRF, the the ABC/FOX duopoly in Rockford, Illinois for a new job as a multimedia journalist at WVEA’s Univision Tampa Bay. She’ll be working weekdays for the 6 and 11 pm newscasts.

Carolina has been working as a multimedia journalist for WTVO/WQRF and as anchor/producer of the Northern Illinois Spanish-language newscast ”Eyewitness News en Español” since October of 2013.

Her last day is October 6. She starts at WVEA on October 14.

Prior to WTVO/WQRF, where she launched her TV career, she was a reporter for impreMedia-owned La Raza newspaper in Chicago from June 2012 until October 2013.

She was previously a freelance reporter for various publications and digital outlets, including ExtraNews, Lawndale News, and Fox News Latino since 2010.

Carolina is one of the founding members of the National Association of Hispanic Journalists (NAHJ) Chicago Professional Chapter, officially established on August 2013 and was President of the group  until September 2014.