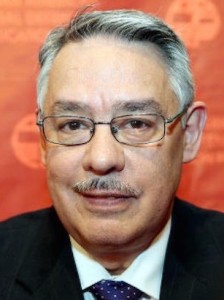 He is the first Latino and first Puerto Rican ever to hold the prestigious Andrés Bello Chair in Latin American Culture and Civilization.

Newly in residence at KJCC, González, who is a founder and former President of the National Association of Hispanic Journalists (NAHJ), has designed a series of lectures, events and public conversations on the Puerto Rican Debt Crisis, the history of Latino Studies, and the cultural and political legacy of the Young Lords.

González has been a staff columnist for New York’s Daily News since 1987 and co-host of “Democracy Now!” for the past 18 years. Among his many awards, he has been honored with two George Polk awards for commentary and a 2004 Leadership Award from the National Hispanic Heritage Foundation.

He was elected to the NAHJ Hall of Fame in 2008. Before he entered journalism, he was a leader of the Young Lords, a militant civil rights organization of the late 1960s, and of the National Congress for Puerto Rican Rights in the 1970s.

More details about free events led by González open to the public are available on the NYU website.