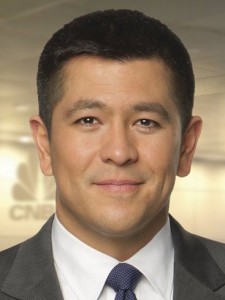 Carl Quintanilla, co-anchor of “Squawk on the Street” and “Squawk Alley” will be one of three moderators of the next Republican debate to be held in Colorado on Wednesday, October 28.

The focus of the third RNC sanctioned debate is money. Carl will moderate “Your Money, Your Vote: The Republican Presidential Debate” with CNBC colleagues Becky Quick, co-anchor of “Squawk Box” and Chief Washington Correspondent John Harwood.

The event will be divided into two parts with two groups of candidates debating job growth, taxes, technology, retirement and the health of our national economy.

Telemundo/NBC will host the 9th Republican debate in Florida in February of 2016.