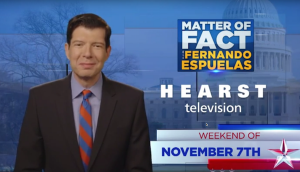 Produced by Hearst Television in Washington, DC, the half-hour weekly interview and discussion syndicated show will also be available online.

Fernando previously hosted a live daily political program on Univision Radio for 7 years until June of this year, when the company canceled its talk shows and flipped the AM stations to music.

He landed the syndication deal with Hearst in September.

Show times and TV stations that air the show can be found on the Matter of Fact website.