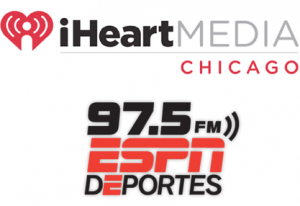 iHeart Media Chicago has decided to end its relationship with ESPN Deportes.

iHeart has signed a new local marketing agreement with Chicago businessman Pedro Segura, who will flip the 97.5 FM to a Mexican Regional format.

Segura is leasing the station, which will be run by his newly created Show Time Media unit.

Former Univision Radio exec Alfredo López will be the GM of 97.5 FM Poder.

López has been VP of Sales for 97.5FM ESPN Deportes in Chicago since February of this year. He was previously General Sales Manager for iHeart Media.

No word yet if ESPN Deportes will seek another radio outlet in Chicago once it loses its spot on 97.5 FM.