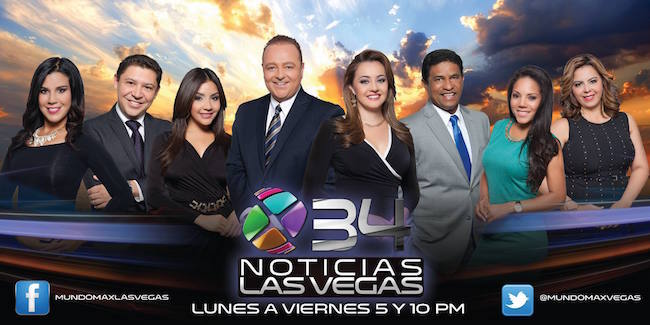 KMCC-TV, the MundoMax affiliate in Las Vegas, has pulled the plug on its 5 and 10 pm newscasts, launched in April of 2014. According to an inside source, about 20 news and production staff lost their jobs, including anchors Ricardo Fernández and Rosana Romero, as well as 4 MMJs.

Staffers were called to a meeting after last Thursday’s 5 pm show and notified that was their last newscast.

According to an email sent out by Chris Román, the station’s President and CEO, “business conditions” forced Cranston, LLC, the owners of KMCC, to shut down news operations.

A source says the station struggled to compete with Univision and Telemundo in Las Vegas and had finally built some brand recognition as a MundoFox affiliate, but the sudden rebranding into MundoMax, the cancellation of the network newscast with Rolando Nichols, and unpopular programming hurt KMCC.

In August of this year, MundoMax affiliate KWHY-22 in Los Angeles also canceled its newscasts when RCN reached an agreement with owner Meruelo Media to lease the station’s signal and take over its operations.

Media Moves reached out to station management and is awaiting comment about their decision to cease news operations.

Below is the email Román sent out on Friday explaining the decision.

Two years ago, we launched a very ambitious ​local newscast in Las Vegas which has proven to be very aggressive at an early stage of our development.  We built a state of the art facility and staff​ed up with ​many local professional journalists ​to launch a twice ​nightly weekday newscast in Las Vegas in early 2014.

We are very proud of the great work done by our team, including the community service initiatives we launched.   Unfortunately, business conditions are such that we, like many stations in this and other markets, have been forced to trim our operations and halt our news operations​ for now.  All other programming continues, along with our commercial services for advertisers.

​As we say goodbye to our very talented news team, I’m mindful that never have I been prouder and more honored to work with such a great team.   We will miss those who are leaving us.

Our stations continue with our other programming, as mentioned.   We’ll keep you posted on further developments.    These are challenging times for everyone, but we will persevere.

We appreciate your continued support and encouragement.