Just shy of its one-year anniversary, Yaveo will cease to exist. DIRECTV’s Internet-only subscription Spanish-language streaming video service, which launched on December 22, 2014, will be discontinued at 11:59 pm PST on December 16, 2015.

The Yaveo website and apps will no longer be accessible after that date.

The website currently alerts users Yaveo will no longer accept new subscribers as the service comes to an end, but will continue to offer Spanish-language entertainment through DIRECTV and ATT&Uverse.

DIRECTV had partnered with Univision Communications and Viacom for the venture. In August of this year, Yaveo announced it expanded its reach by hopping on to Roku.

There is no information currently available on the number of subscribers of the service, but the decision to shut down Yaveo is apparently a direct result from the DirecTV-AT&T merger. 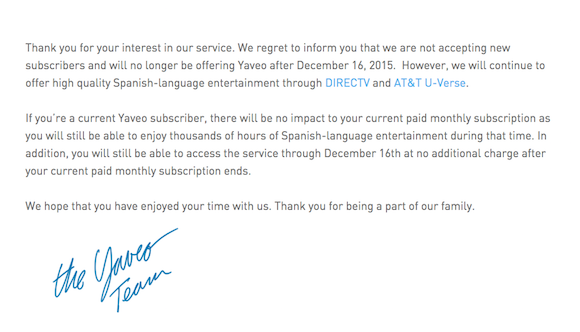