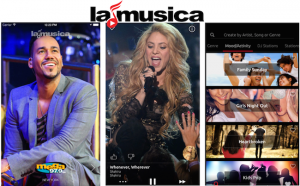 The LaMusica app includes streams of all SBS radio stations and talent in the U.S. and Puerto Rico, curated playlists, social networking features that allows sharing favorite stations or playlists with friends, and, according to the company, access to more than 23 million songs.

The app also has a “My Radio” personalization tool that gives users the ability to create their own playlists by artist, song or genre.

The content is available on an English or Spanish-language interface.

The free app is now available for iOS and Android.