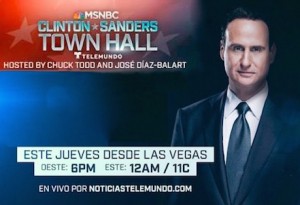 The moderator spot gives José, who currently anchors “Noticiero Telemundo,” Saturday editions of “NBC Nightly News,” and hosts his own show on MSNBC, added visibility during this election cycle.

Next Thursday, Telemundo anchor María Celeste Arrarás will also get a chance to participate in the process. She’ll take part in the Telemundo-hosted Republican debate as a member of the debate panel.