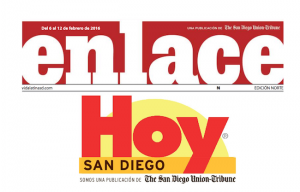 After a 17-year run, Enlace has its last publication this week. Starting February 13, the San Diego Union-Tribune’s Spanish-language weekly will have a new name. It will become Hoy San Diego.

“Seventeen years. Five redesigns. A couple of generations of writers, editors, copy editors, designers and translators. Thousands of stories and lots of love and journalistic professionalism end today under the name of Enlace as the publication finishes its circle,” wrote Enlace’s founding editor Lilia O’Hara on her Facebook page. “It will be a new day, but today I want to thank every single person that has been part of Enlace. Gracias. We did a good job.”

Hoy San Diego will have original content written by local San Diego writers as well as journalists from its Los Angeles Times counterpart, Hoy Los Angeles. The publication will also use and adapt and translate stories into Spanish from the Union-Tribune and LA Times.

Hoy San Diego will have zone pages for the North and South regions of San Diego County, as well as a Riverside edition and a Baja California edition named Hoy Fin de Semana.

In a statement, Hoy publisher Roaldo Morán says: “This move will make Hoy the largest Spanish publication in Southern California and in each county it serves with a total distribution of 835,000 in LA, 116,000 in Orange County, 157,000 in the Inland Empire, and 177,000 San Diego, as well as 130,000 In Baja Mexico. Hoy’s total distribution of 1.4M single copies will provide our advertisers with expansive reach in one of the most important Hispanic markets in the country.”

The San Diego U-T will also continue to publish its Spanish language entertainment and lifestyle publication Vida Latina San Diego on Fridays, along with its accompanying website vidalatinasd.com.

Hoy San Diego, which will be delivered to over 134,000 Hispanic households every Saturday, will also be available in newspaper racks around San Diego.